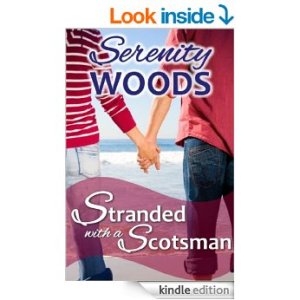 Review – Stranded with a Scotsman – Serenity Woods – A short story
Cori and Ewan have a past that neither of them managed to really put behind them. Whilst Cori is visiting her friend Izzy, who just happens to be Ewan’s sister, she is shocked when it isn’t her friend who picks her up but was in fact her brother that she still has feelings for. They went to some causeway and got stranded by the tide leaving them stuck til it went back out. (I do think this was intentional on Ewan’s (behalf)
It’s sweet and caring and at times you want to bang their heads together till they realise they’re just waiting for one another.
The characters are portrayed well but a little wishy washy for me. But then I’m the sort of person who’d have stood up to her dad and would just tell the guy I liked him! That’s me though and I do like Cori’s naivety. She’d never of followed him and got stranded without that innocence.
Halfway through the book they finally kiss and admit they missed one another during  game of truth or dare.
The truth game continues and we learn about the high class type of lifestyle Cori comes from and how it feels stifling to her. And she admits the man she is expected to marry in a few months doesn’t hold her love.
He convinces her not to marry the fiance (Henry I think, at least something like that) and you get the expected moment when they confess their feelings for one another.
I don’t really know exactly how o feel about this. O knew it would be short, it’s a short story so it would be. However I was still strangely disappointed. I just want a bit.. more.