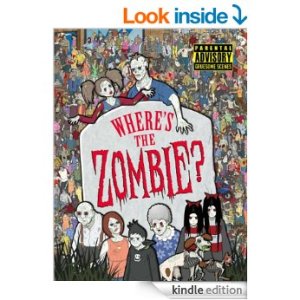 February 11th – Worry for Dr Peters who has been quarantined.  February 20th – Fear the Dr, his parents, his wife, his four children, a cat and dog.
So we’re hunting the pages for the ten zombie members of the family and told there are medical kits to help cure.
Looks like a bit of a laugh and the illustrations are fun so I’ll give it a shot!

Picture search one – March 3rd and were at the quarantine centre.  The details are great. In amongst Dr’s, nurses and people in biohazard suits you have blood splatters, infected falling from ceiling, a man throwing up on the floor…. A lot of work obviously went into making the scene full and believable.
So we hunt for the family… I found granny, grandpa, dad (the Dr) and one of his twin daughters quickly. I also found 4 medi packs.  I found two more medi packs but no more family members. I hunted for ages and found many other zombies but not the ones I was looking for. I did have to go back to the family pictures to remember why they all looked like.

So more picture  one – there’s a man who appears to be getting his bum looked at by a Dr and a bunch of people in the back stood in their underwear. There is also a flimsy looking pen full of zombies. These people have obviously not watched as many zombie films as me, I’d be running the opposite direction!
I found six medi packs but was distracted from looking for the family by the couple in wheelchairs. He’s ok, she not! Zombie gram (not from the family we’re looking for, we already found her) appears to be chasing her husband!
I found mum and dad, it must not have been him I found in the first one. I found the second twin and the older sister.
Looking back over the entire two pages off the picture I found the dog but the boy and the cat continued to remain hidden.
I gave up. I went to the next picture.

The real picture two – March 8 and were at an event in the park. Crazy town thinks to do this after last week’s hospital fiasco? Dad, son, granma, older girl, one twin, grandpa and dog were found easily enough along with 7 medi packs. I got distracted by all the little details happening in the pictures. There’s a mugging and a woman teaching her kid to walk amongst the chaos. I found the second girl but the cat…. He’s good, I still can’t find him!

Picture 3 – March 17 and these crazy people still aren’t hiding but are instead heading to the shopping mall! There’s some brilliant little scenes, a woman knocking a zombies head off with nothing but her handbag, a zombie in a mascot suit. It took a little longer and there were more infected to hunt through but I found the family and I found the cat!

Each picture is getting harder and taking more time. And as you look carefully through the images there are so many fun little scenes.

The next few pages show the answers and give you extra things to look for.

I had a lot of fun with this where’s the zombie book! It’s addictive though so only start if you’re planning on going through the whole thing!