So today I had plans on a piece I had written about Epilepsy and then my computer went a bit funny on Facebook, it kept flicking pages and consistently took me to one that I hadn’t been on in a while. Uncle Bush, who was in fact my dad’s cousin, Hugh Gracie died on the 16th June 2013 at only 51. He left behind his wife and two teenage sons. Not to mention the rest of his family and many many friends. His funeral hosted an amount of people in one place that I have not been witness to before. The cemetery was packed…
Now call it what you want but a little bit of me wants to think it wasn’t just a fault that kept pulling me to his page..
I won’t get into a life after death debate, I see points from both sides but my own personal belief, more of a want is that there is something beyond. That my loved ones who have passed on aren’t just gone. I believe their spirit lives on…
Anyway.. It had me thinking of the people I have lost. These last few years have been particularly hard and a lot of loved ones have been prematurely taken.
I don’t want to sink into depression with thoughts of death. I make no secret of the fact that I suffer from depression and are medicated for this. What I thought instead was that I’d look at the good. At the memories no one can take from you and the ones that make you laugh and smile and cry.
So this is my remembrance for a few of the people I have been unfortunate enough to loose.

Here are some of my memories of them.
Aunt Anne (my great aunt, sister of my papa Roy)) – Aunt Anne once had a little dog called Katie, when I would visit she would have me walk the dog on the field opposite her house with bribes of a glass of Irn Bru. I remember getting back, pouring rain and she told me the dog wasn’t walked enough and sent me out to do it again!
Aunt Ann (Brownlee, my gran’s sister.) – Aunt Ann used to watch us from time to time, she bought Aladdin when it first came out for us to watch, I can’t believe how excited it made us. Even today when I see something from Aladdin I picture her face and smile.
Papa (Tommy, my gran’s second husband.) – Papa was sly! Gran had gone to the shop and asked that he not go out. I went to the bathroom and Mark was talking to him. I swear I was only in there for a couple of minutes, come out, Mark’s alone. I asked him where papa was, old bugger had snuck out to the bookies!!! (Should point out he was in his 80’s at this point and we were meant to be going for lunch, we didn’t just tell him he couldn’t go out.)
Uncle Jim (Gracie. I just don’t know how to explain the relationships, if we dont know how they often just become aunt or uncle. I think was related like this, his mother in law was the sister of my grans dad. Work that out!!) – Always in these blue overalls, smelling of a mixture of oil and mechanical stuff and cigarette smoke. I don’t remember him without a cigarette in his mouth but I do remember him flicking his ash into his pocket instead of the floor or an ashtray.
Uncle Bush (Bush is Jim from above’s son) – Bush had a finger missing, many stories filled my childhood of how he told a lie so it fell of, he picked his nose and it got stuck up there.. and many, many more. His knuckles had had love and hate tattooed on them, without the finger it ended up as love and hat. I will never forget the jokes of how ‘someone had to love hats’.
(Mark has the same finger missing, Bush was desperate for him to have matching tattoos.)
Nanna Orange (Mark’s nan.) – Nana Orange was hilarious, the first day I met her I had gone to pick up a magazine rack that she was binning. After receiving every detail about the piece of furniture from the time she owned it she then pressed £25 into my hand to thank me for taking it!
Nan Cockell (My husband, Mark’s nan) – I never really had a chance to really know Nan Cockell but she insisted each time that I visited on bringing out this same bottle of lemonade so I could have a glass (I dont drink tea or coffee but really just wanted water). The lemonade was as old as time and sooo flat, but she’d watch you drink every last drop and then put it away for next time!
I also want to point out two others. My Grandad, Gordon was great. I remember fondly the time I spent sat on his lap in front of his massive tropical fish tank while he told me all about them. And Uncle Geordie (Uncle Jim’s brother) once the tallest man in Scotland he’s in record books and everything, at 7ft4 he really was a gentle giant. Another lap I spent time on he was just a great big teddy to cuddle with. The smell of a pipe always puts me in my mind of snuggling up on his specially made chair and listenin to stories.

Then there’s something else, the animals that made a really strong impact in your life. I have been blessed to have owned many animals, my whole family are animal lovers and so we have always been surrounded and unfortunately they pass on.
Her are some that really touched my life.

Chelsea – Chelsea was my best friend. She slept in my bed, I walked her, fed her and I even still have the scar on my thumb from wrestling a tin of dog food to feed her! Chelsea was my ‘get out of being grounded’. I’d just take her for a walk, for five hours and in the company of my friends!
Joey (Joe Louis) – To begin with his mum was a rescue and only six months old. She had to have an emergency c-section and he was the only surviving kitten. We were only allowed to take our cats home because the vet advised that both mother and kitten wouldn’t survive. I was only 17, Mark and I were a couple but I lived alone with my cats. Well he made it, hand reared, getting up for bottles every couple of hours! He was really daft. My favourite memory was this: I never closed my window, they could just come and go onto the balcony, one day a bird hit the patio door so I closed this window for the first time. Joey didn’t get that and he proceeded to run, full speed into the room and jump straight into the glass. Hmm, reading it back sounds a little mean but it really was funny and he wasn’t hurt just incredibly confused as to why he couldn’t get out the window.

Not everyone has been mentioned here but I’m sharing with you the ones that affected me most.
I don’t have many pictures on my computer and the ones I do have are blurry and not great but they are all I have. (I do have some printed but I don’t have a scanner or anything.) 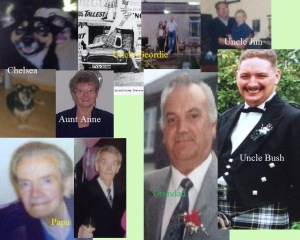 Anyway, thanks for reading and keep strong for your own losses.
Next week I’ll upload the piece I wrote on Epilepsy.